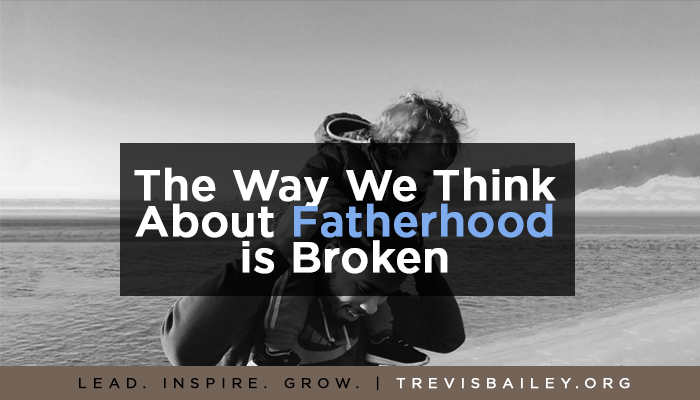 The Way We Think About Fatherhood Is Broken

In today’s world, we are bombarded by images and stories of women raising children alone. No doubt, this is a very serious reality that has shown itself across the entire world. However, because of the glaring focus on absent fathers, the fathers that are truly doing what they are supposed to (or are at least trying) are going completely overshadowed. A lot of that “overshadowing” is due to the idea that ‘Fathers don’t need recognition for things they’re supposed to be doing’… which is understandable. But I’d like to use 3 points to illustration the idea that we must shift the way we think about Fatherhood.

1. Dads Babysit.
There is nothing about a father spending time with his children that should suggest that he’s babysitting. Women are typically very invested in the process of pregnancy while it’s happening. They read books and articles and form an idea of what kind of Mom they want to be. Men may not read books and articles but the anticipation of becoming a father is unmatched. We dream about what our child will look like and what kind of things we can place in them to help them develop. There isn’t a way that someone who is looking so forward to the birth of their child is considered a babysitter. Men are just as capable of raising children as women; that should be respected.

2. Dads Play Too Roughly with Kids
One day, I was outside playing basketball and I somehow slide across a garage floor and into a riding lawnmower. Little did I know that the blade had actually stuck into my shin. My Dad (an EMT) had to come and pick me up and take me to the hospital. While I was there, I heard the doctor say, “Boys don’t grow up until they get stitches or break a bone.”. That has always stuck with me. Now, before your eyebrows rush to the top of your forehead, I do not wish for my sons to have to get stitches or break a bone. But the ability to run, jump, and enjoy being a child is important. Dads play a unique role in helping children develop self-awareness, strength, and imagination. This isn’t just for boys either. It’s also for girls. Fathers play an important role that should not be overshadowed.

3. Dads don’t need support
Father’s Day on social media can be one of the most absolute dreadful places. One of the hardest things to hear as a good father is “It’s so great to see you interact with your kids.” or “Thank you for being in your kids lives.”

While there are many men who have walked away from their responsibilities, there are several men who remain active; regardless of the situation. Those men should be celebrated.

Sure, it’s the responsibility of a father to be a Dad (Fathers and Dads are 2 different things) is expected, but given the very visible nature of the void left by absent fathers, I believe it’s okay to recognize men that are truly trying. Maybe the recipient of that praise may feel odd for receiving thanks for something he was born to do, but it certainly does more good than harm.